‘Atlanta’ Walks Between Magic Realism and Keeping It Real

Home/Calibay Blog, Entertainment/‘Atlanta’ Walks Between Magic Realism and Keeping It Real
Previous Next

‘Atlanta’ Walks Between Magic Realism and Keeping It Real 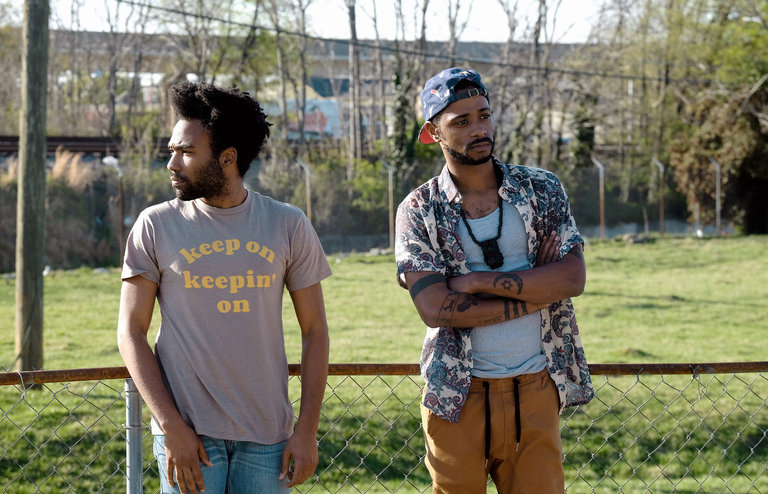 In the presidential debates and at campaign rallies, Donald J. Trump has indulged a fondness for the equation of black life and hell: Happiness is scarce, and misery, poverty and violence afflict all. That’s a certain white man’s view of black life, as seen on his TV set — in 1989, when the Huxtables were the only prominent African-Americans visible amid proliferating news images of “dangerous” black people. Television in 2016, with its bounty of black shows, both rebukes and complicates that dehumanizing assessment. And the show doing that with the most farcical tang, at the moment, is “Atlanta,” now in its first season on FX.

The premise is otherwise sitcom standard: A Princeton dropout named Earn (Donald Glover) comes back home to Atlanta and tries to manage the rap career of his weed-dealer cousin, Alfred (Brian Tyree Henry), and help raise a toddler with his baby mama, Van (Zazie Beetz). It’s the old wayward-son-returns model. But the show, which Mr. Glover created, doesn’t obsess over that premise nearly so much as explore its felicitous human topography. This is a sitcom that, in devoting an entire episode to a day in the life of Van, managed to twist a very good episode of “Girlfriends” into hungover, guns-holstered Tarantino. Elsewhere, if the sideways Atlanta rap acts Goodie Mob and OutKast were to write for “Seinfeld,” you might get something like the episode set on a fake, black cable network’s fake, black “Charlie Rose”-style show and situated around questions of sexual and racial authenticity.

“Atlanta” is rigorously attuned to the comedy of being alive. A lot of that life springs from the craziest sources: accents, T-shirts, cartons of glowing food, a pudgy school kid in whiteface, jail. But mostly it comes from the bit players of “Atlanta.” A lot of them are played by actors who actually hail from the city or nearby, and, all together, they’re the boxes under a Christmas tree. The writing does a lot of the work here, as does the directing, most of which is by Hiro Murai, who is Japanese. But for a show that combines low-key naturalism and a steady helping of the surreal, you also need actors who don’t seem as if they’re “working.” That’s a long way of saying that “Atlanta” is one of the best cast and most brightly acted shows of any kind on TV.

Earn proves less magnetizing than the people he hangs with and the strangers who accost him, a constellation of cops, school principals, city-bus passengers, D.J.s, children, frenemies, inmates, stoners and bizarro celebrities. The lowly lumps of suffering that Mr. Trump imagines he’s talking to when he presents himself as black America’s white savior (“What the hell have you got to lose?”) don’t exist on this show. Anybody expecting a pathological monolith gets, instead, a kaleidoscope of personalities and class, of parents — married, single and somewhere in between. Violence and poverty are part of this world, but neither defines any of its characters. Even the jailhouse wino owns a rich inner life.

The entire cast helps give the show this strange, almost spiritual union of the urban and rural; of the broke, the baller and the bougie; of keepin’-it-real and magic realism. It’s full of actors most people, including myself, have never seen, like Mary Kraft, who’s marvelous as Alfred’s huffy, rumpled, white academic adversary on that phony talk show. And they’re really good. Mr. Henry’s low-key charisma is even better than that. He keeps his face somewhere between wonder and weariness. The brilliant trick of his acting is to make you forget he’s acting at all. To which I can hear the Tony and Olivier winners of the world scream, “But that’s acting!”

With an established star, you know what you’re getting. I never know what to expect from Mr. Henry. Yet the culture has trained us to know what to expect of the character he’s playing, whose nom de rhyme is Paper Boi. More than 40 years of movies, TV and music have told us who Paper Boi should be — macho, street smart and made of onyx, musk and cardboard.

But Mr. Henry opts to work with flesh and blood and a brain. He’s not playing Paper Boi. He’s playing Alfred, and Alfred is complicated — a thug indifferent to thuggery, a self-conscious introvert whose ego can overtake him, a teddy bear with a loaded gun. Even by the standards of black men on television in 2016, in the era of “Empire,” “Power” and “Ballers,” Mr. Henry has invented something new: this amusing tempest of vulnerability, exasperation and warmth. Some of the funniest television I’ve seen this year has required his virtuosic subtlety — the way his body jiggles in anger as he taps up a text storm, or the way he mumbles and pulls on Alfred’s country twang.

Earlier, I almost typed “weird” to describe this guy. But that’s also a word for Alfred’s permanently stoned sidekick, Darius, whom Keith Stanfield plays as a nincompoop visionary. He’s wonderful, too, a snoopy, Snoopy-looking guy, who can’t be upstaged by high-on-drugs costumes (a Bedouin turban and a T-shirt, say). He, Alfred and Earn are weirdos to one another and to other black people, too. On any other show, they’d be played by fitter, hotter actors. But “Atlanta” isn’t going for sexy. It’s going for a warped kind of real — and sometimes winds up at sexy anyway.

The most inevitable description of “Atlanta” tags it as another one of those shows about nothing. But that actually frees it to do anything.

Episode 2 might be the best example of what this show’s acting can do with its smart writing. The primary set piece is the jail Earn and Alfred wind up in after a shooting in a parking lot. And after a while the episode ceases being TV and starts to resemble a social-realist mural, with different elements of the jailhouse brought to life, in part by the superb casting director Alexa L. Fogel, a veteran who found the faces and personalities for great shows like “The Wire” and “Banshee.”

In the opening long shot, Earn and Alfred sit in one of the waiting areas. The steady brilliance of the episode’s 23 minutes starts with the interplay of the characters’ sense of humor with the dreariness and callous bureaucracy of the jail. The show can sense a vaster misery and untreated stress that for some of these characters has become a feature of the day-to-day. But this is Earn’s first time, and he’s cavalier about it. For everybody else, it’s some variation of “I hate this place,” which becomes a refrain.

There’s a small, spiky moment between Alfred and a clerk (Angela Ray), a pane of security glass separating them. He asks the clerk whether Earn is going to be released, and she says they’re keeping him until his bail’s been posted. Alfred asks what the charge is, and the clerk looks up, leans back, widens her eyes and switches the code from accommodating to aggravated in exactly one second. “What’s the charge?” she asks, using the N-word. “This ain’t no movie. You better wait till he’s in the system.”

Really, you have to hear her say it, but she makes you hear a record scratch. She taps her pen on the counter and keeps her eyes on Alfred until all he can do is bend down to the window’s opening and whisper, “Man, I hate this place.”

Darius meets Alfred at the jail, and on their way out, a police officer (Bret E. Benson) — a black guy, handsome, ecstatically loud (the name tag says “Sandy”) — runs up to Alfred, throws an arm around him and says a variation of the show’s running motif: “Eh! You that Paper Man, right?” He heard there was a rapper on the premises and can hardly contain himself.

A dozen details make this moment funny, disturbing and disturbingly funny. There’s the incongruity of the context — what cop could summon this much alacrity in a facility this drab? And the deadened, disbelieving look on Alfred’s face is like a wall the cop doesn’t notice that he keeps crashing into. Anyway, how easy would it have been to make the officer white? His being black makes his enthusiastic indifference all the more insulting to Alfred and therefore all the more farcically sad.

This encounter lasts for less than a minute, and for most of it the cop never forgets who’s in charge. He blithely tells a dumbfounded Darius when to snap a photo and directs Alfred to come closer and stand back to back with him.

But the pose before that made my jaw drop. The cop’s arm is around Alfred’s shoulders. When Darius takes the picture, Sandy uses his free hand to suggest a gun that he points at Alfred. The joke is that he thinks that imaginary gun is a joke. That scene captures an aspect of the disjunction between black life and American law enforcement. Officer Sandy doesn’t really know Paper Boi from a paper bag. He’s just one of the many black perps who cycle daily through the system he’s paid to uphold.

What makes the exchange so devastating is that each actor has to be not only on a different page but also in a different book in a different part of the library. As the cop, Mr. Benson does a combination of throwing lines away and italicizing them, making power and privilege something to play with. His throwaways are where the threat lies.

Mr. Henry, of course, provides a mighty anchor, summoning an uncanny trauma: one part exasperation, one part fear. A lifetime of humiliations like this constitute a little death. But Mr. Stanfield offers the grace note. When Officer Sandy bounces off and Alfred restates how much he hates this place — the way you loathe, say, a trip to the dentist or the D.M.V. — Darius casually, earnestly asks “Why?” This is “Atlanta” in 48 seconds, a riot about simmering rage that’s chillingly easy to shrug off.

Everything about this episode is funny or cute until the amusement hits a moral or emotional boundary. Stress is a staple of lots of good television. But usually it’s a function of the plot: Now what? On “Atlanta,” stress isn’t lifestyle. It’s an emotion, and to carry it off, you need actors as skillful as the ones here, vibrant people who make you wonder what took TV so long to find them, people who leave you praying that executives and producers continue to trust black storytellers to keep going. What the hell have they got to lose?